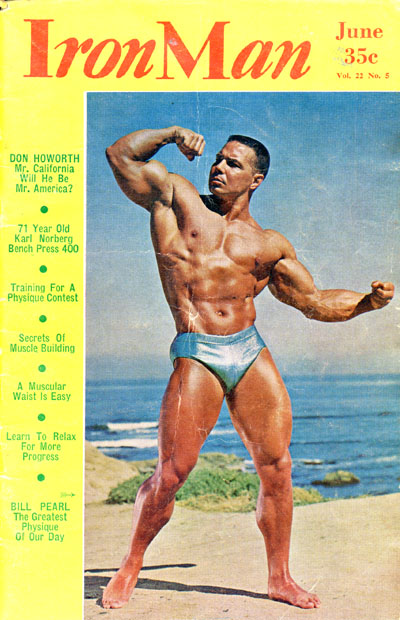 Mike Knight got the chance to visit Pearl's and Draper's seminar in 2005. He gave me the permission
to share his work!
"First off, it was good to meet John Corlett and his brother today, they are great guys. Also their friend

Modesto, California, an exhibition lift at a bodybuilding contest. I didn't get at date on that. I asked how Sipes'

form was, he said strict but didn't pause the weight at his chest. He also said that

in 1962-64. He also told me that there was a man at the seminar today (I didn't meet him and don't remember

his name) that actually saw Chuck Sipes bench 510x5. So it appears that Sipes could have possibly benched

570 after all, unless of course these people are compulsive liars. My take on it is this, he may have benched

"cycle" and highest bodyweight. He probably normally trained with 405-425. I can see that as realistic.

and will undoubtedly take it's toll on your body - joints, etc...But like I said, if you believe them, it happened. John Corlett can give you the gentleman's name. I would have videotaped the interview, but my battery had died by then

Here's how it went:

Me: "What have you ever seen Chuck Ahrens actually lift?"

Bill Pearl: "The most impressive thing that I've ever seen Chuck Ahrens do is

standing side lateral raises with 100 lb. dumbbells with ridiculous ease."

"flying saucers". I kicked him out of the gym for that, it was very dangerous."

Me: "Are the side laterals the only thing you've seen him do?"

Bill Pearl: "No, I've seen him do all kinds of things, but that was the MOST IMPRESSIVE, of all."

"He was a strong guy upper body, but no leg work whatsoever".

Me: "What about the overhead dumbbell presses and overhead stuff?"

Bill Pearl: "He was very strong on inclines and overhead presses."

Me: "They're talking about 250 pound dumbbells on overhead presses".

Me: "What else have you seen?"

Me: "What about lying barbell tricep extensions to the forehead?"

Me: "To the forehead?

Bill Pearl: "No, but he trained at my gym, with Pat Casey and other world champions and he was just one of the

other MONSTERS that were there".

Me: "The reason why they are on him (I guess meaning us) is because he never competed".

Bill Pearl: "That, plus he never took his shirt off."

Me: "Okay thanks for the interview, wait, one more question - Did you ever hear Ahrens ridicule Anderson when

he lifted at Muscle Beach?"

Bill Pearl: "No, but there's other's who did, which I'm sorry to hear, but not Chuck. Chuck never badmouthed anyone".

Bill Pearl: "He was "different", he was a nice guy, but unGodly different, he was in his own little world".

Me: "But he's not as strong as they are making him out to be, with some of those overhead lifts?"

Me: "What about the bench press?"

Bill Pearl: "I never saw him lift anything on the bench press that I was impressed with, because we had guys like

Bill Pearl: "No, but on some specific lifts like presses and laterals and so on, he was unGodly strong."

NEXT I talked to a man that turned 70 years old today. His name is John Baron. He said that he actually trained along side Ahrens in 1962-63.

Me: "What did you actually see Chuck Ahrens do?"

Me: "How did he get it up to his shoulders?"

John Baron: "He used 2 hands to lift it from the floor to his shoulders."

John Baron: "3 reps." "He used to do alternating dumbbell curls with 150 pound

Me: "Did he swing them up a little"

John Baron: "Not much" (inferring that they were fairly strict).

Me: "Were you around him alot?"

John Baron: "A little, he was bashful. Not very much."

Me: "What about anything else, barbell overhead stuff?"

John Baron: "No, just dumbbells, he was a dumbbell man. Mainly because he was too lazy to clean the bar. "

Me: "What about bench presses"

John Baron: "Only dumbbells, I saw him do 220 pound dumbbells for easy reps in the flat DB Press."

Me: "Did you ever hear him ridicule Anderson's lifts?"

John Baron: "Oh No, he was a nice guy, just bashful, he was very much

Me: "So what was the most impressive thing you've ever seen Ahrens do?"

John Baron: "The one arm 310 for 3 reps overhead. There wasn't much side-bend, just straight up".

NEXT I cornered DAVE SHAW.

I didn't tape it (battery died), but basically, Dave gave a few reasons for not believing the Ahrens stuff. Ahrens trained at 12:00pm or 1:00pm when the gym was empty. He never competed. Dave never saw Ahrens lift anything special. Steve Merjanian has been seen doing inclines with 405-495 or 500 by Dave Draper and Dave Shaw (Draper said this during the seminar, but did not mention Ahrens at all when commenting on incredible lifts that he'd seen). Dave Shaw also told me that some credible source saw Merjanian do a seated behind the neck press with 405 (using a back support).

I asked Bill Pearl and Dave Draper what their best lifts were. Dave said he benched 450 on muscle beach without a spot in the early morning. I think 450 was his best squat also (battery died on video camera). He said that he did a clean and press with 315!!! Which he was proud of - I think that is impressive.

Bill Pearl said 310 in the seated behind the neck press. And a 600 squat without any knee wraps/equipment. I think he also said a 450 bench - he did not say he benched 500.

So there you have it. Now try to figure it out.